There’s a few things they don’t tell you about travelling in the Gilis that you really should know before you head out to the paradise islands. Besides, nothing taints a perfect island vacation more than painful inconveniences and avoidable mishaps. 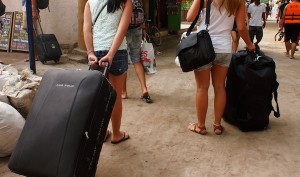 A pretty common sight in the Gilis; fresh off the boat with bags in tow and unsure where to go.  (Photo by E Zuliani)

Ideally, you should only bring a medium sized backpack or weekend bag to the Gilis. Here’s why. The boats drop you off on the beach and hand your bags over to you on the shore.

So many travellers get caught out on this one. You see people hugging large suitcases over the shore and dragging them around the island, looking for accommodation. If you haven’t booked your accommodation and you’re expecting to rock up and find a place to stay, then you don’t want to be walking around with heavy suitcases in tow.

#2 Get the fast boat from Lombok

The sea gets choppy between January and February. If you have weak sea legs, then the 20 minute boat transfer from Lombok to the Gilis is the way to go. The boats are also less crowded from Lombok during high season. And remember to book your tickets with a reputable operator – don’t get on an overcrowded boat.

The Gilis are becoming such a popular island destination that they barely feel the pinch of the low season. This means that accommodation during high season fills up fast, especially the budget and mid-range options.

Organise your accommodation before you get there, or you might find yourself with no other option than to blow your budget and cut your island time short. Try these 8 AirBnB Gili island stays under $75 to find something different. 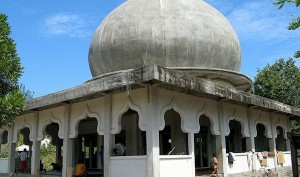 Tourists aren’t allowed to enter the mosques in the Gilis. (Photo by Rosino, Flickr)

Unlike Bali, the Gilis (and Lombok) are Muslim territories. Show respect for the local people and customs. They appreciate it.

Homebrewed alcohol known as “arak”is not only dangerous to consume, it’s pretty darn unpleasant. That hasn’t stopped some people from drinking too much of it and ending up in the hospital. It’s just not a good idea. Stick to Bintang.

Also, beware of cheap drinks and one-for-one cocktail deals. It’s not uncommon for bars to use arak as a cheap (but potent) mixer.

#6 If the water smells funky…

Don’t brush your teeth with the tap water, use bottled water instead. Fresh water on the Gilis is scarce, and imported from the mainland. So most showers are linked up to the salt water system, which at times, even smells funky. Rinse with a bottle of fresh water.

The most common ways a beach holiday gets ruined are; ear infections (from sea water getting in your ear drum) and devastating hangovers. Bring a rehydration pack for the hangover, antibiotics for the ear infection and a tube of disinfectant for minor cuts and grazes.

#8 Is there malaria in the Gilis?

No. A few years ago, it was misreported (and never retracted) that malaria and dengue were present in the Gilis. We know now, that the chances of getting bitten by a malaria parasite or a dengue mosquito are slim to none. So chewing on anti-malaria tablets is not necessary. You will get bitten by harmless, though annoying mosquitos, so mosquito repellant is a must, and it just so happens to be your best defence against dengue.

Now that you’re prepared for your island getaway in the Gilis, check out these awesome 25 things to do in the Gilis on island time.